The details emerging about the Eager Lion 12 military exercise in Jordan are almost as scary as the speculation circulating in the press about a Syria (or Iran) mission preparation.  Jordan and the United States continue to insist that the exercise has no connection with any real-world events.

U.S. Central Command (CENTCOM) now says that the exercise is “the largest annual exercise in the Central Command area of operations,” supplanting Bright Star, the exercise series previously conducted in Egypt.  I guess the masters of war planning have a lot of faith in the stability and resilience of the Jordanian government, come to think of it, just like they did about Egypt.

Eager Lion, which most press reports refer to as including 17 participants, actually includes 19 participants, according to CENTCOM.   They include Australia, Bahrain, Brunei, Egypt, France, Italy, Iraq, Jordan, Kingdom of Saudi Arabia, Kuwait, Lebanon, Pakistan, Qatar, Spain, Romania, Ukraine, United Arab Emirates, United Kingdom and United States.  The exercise is touted as “building relationships,” but the 19 nations weren’t named until May 15th: I suppose it’s more like a furtive affair than a relationship.  It’s interesting to note that Turkey, previously reported as participating, evidently is not; and that Iraq is there. 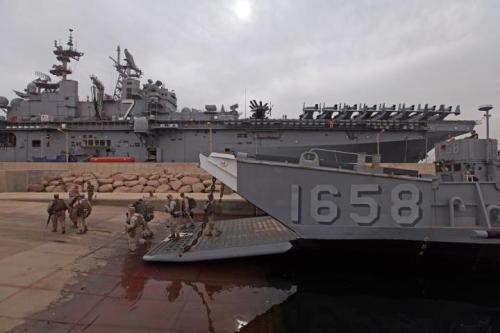 Marines with the 24th Marine Expeditionary Unit offload from a Navy Landing Craft Utility vessel at the Royal Jordanian Naval Base in Aqaba, May 2, 2012, to begin their participation in Exercise Eager Lion 12. (Official Marine Corps Photo by Sgt. Richard Blumenstein)

And though special operations is the undeniable focus, more than 1,000 U.S. Marines with the 24th Marine Expeditionary Unit stormed ashore – okay maybe didn’t storm, but landed – in a display of amphibious readiness.  What surprised me in the belated announcement of the Marines May 2nd landing is that the Marine Corps casually referred to the augmented battalion and its Iowa Jima assault ship as the “forward-deployed crisis response force.”

I didn’t even know that there was such a crisis response force, and nothing was reported in the news media when it was deployed in March.

The on-scene U.S. commander for Eager Lion 12 is Maj. Gen. Ken Tovo, who in his day job is Commander Special Operations Command Central (SOCCENT) and for the exercise is Commander, Combined Joint Task Force Spartan (CJTF Spartan).  Tovo is one of the most talented officers in our Army’s senior ranks and clearly is one of our nation’s Special Operations Forces’ superstars,” CIA Director David Petraeus said in an email to the Tampa Tribune.  There’s an odd hit job on Tovo on Examiner.com, as if anything is actually known about the man.